Atomic Layer Chemical Vapor Deposition(ALCVD) is vapor deposition method, which precursor and reactant are injected in the reactor alternatively. Different from normal MOCVD process, it is self-limited surface reaction which is affected by the surface temperature. Monolayer of material is deposited by repeated exposure of precursor and reactant. ALCVD process is a key process in the fabrication of semiconductor device because of these deposition characteristics. 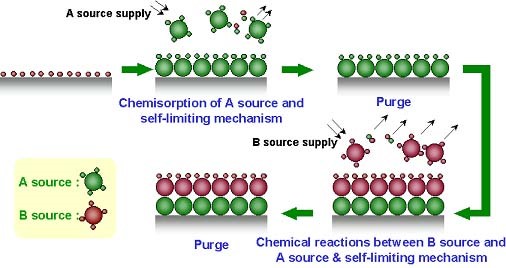 Resistive Random Access Memory (ReRAM) is a next-generation nonvolatile, fast speed, and low cost memory. It is based on resistance change of insulator of metal-insulator-metal (MIM) structure. Insulating layer is switched as high resistive state (HRS) and low resistive state (LRS). Each state is matched with “0 (Off state)” and “1(On state)” in the memory device.

Because some semiconductor (ZnO, CdS, CdO, etc) has defects on its surface, oxygen molecules is absorbed on surface in ambient air. Oxygen molecules is absorbed with trapping surface electrons of semiconductor, and thus, a depletion region is developed on the surface. Due to this depletion region, which exhibits a characteristic Debye length, the resistance of semiconductor in ambient air is higher than that of semiconductor in vacuum. Upon exposing it to a target gas (reducing gas), the gas molecules react with surface oxygen species and induce desorption from the surface, allowing them to inject captured electrons back. As a result, the conductivity is restored, and this change in conductivity allows for target gas sensing. As a same principle, when exposing semiconductor to light (has higher energy than band gap), electron-hole pair is generated. Generated holes recombine with trapped electrons, and induce desorption from the surface. According to this sensing mechanism, the surface coverage of chemisorbed oxygen is the main factor affecting the sensing properties.